Cleveland State University Library News Topic: Now On Display in the Library! "From Hidden to Modern Figures: NASA’s Past Shows the Way to the Future"

Now On Display in the Library! "From Hidden to Modern Figures: NASA’s Past Shows the Way to the Future" 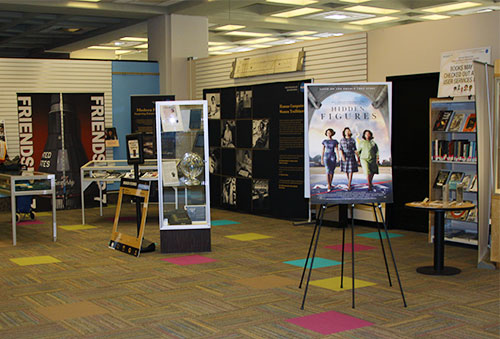 The exhibit, "From Hidden to Modern Figures: NASA's Past Shows the Way to the Future," on loan from NASA Glenn Research Center, is on display in the library until May 15. It is based on the Hidden Figures movie and book, which tell the real life story of how three African-American women mathematicians working at NASA, contributed behind-the-scenes to John Glenn's first orbit around the earth in 1962.

Included in the exhibit are two interactive kiosks with narratives of local NASA women scientists from that time period up to the present. Of special interest are photographs and a narrative by Annie Easley, an African-American scientist and mathematician who worked at NASA Glenn Research Center and received her B.A. in Mathematics from CSU in 1978. Easley worked as a "computer" in her early career, similar to the women in Hidden Figures.

Also on display are replicas of scientific items (courtesy of the CSU Physics Department) shown in the movie, historic photographs, and books highlighting women and minorities in science and engineering. The books can be loaned out, including several copies of Hidden Figures.

Stop by to see the exhibit before it moves on!