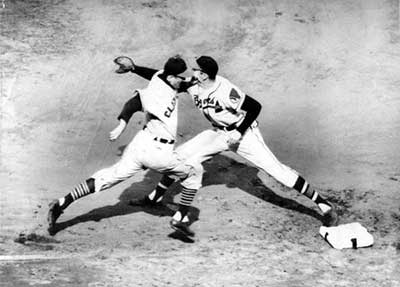 Lou Boudreau of the Cleveland Indians runs to first base in the 2nd World Series Game - 1948.

With the results of the games played on September 30, the Cleveland Indians have been mathematically eliminated from playoff contention this season. Despite a strong second half, the Tribe simply ran out of time, and came up a little short.

I know it gets old to hear this all the time, but wait until next year! With a core of talented young position players such as Jason Kipnis, Yan Gomes, and Francisco Lindor, and with some of the best starting pitchers in the league in Corey Kluber, Carlos Carrasco, and Cody Anderson, the Indians are poised to make a genuine run at the pennant in 2016. At least that’s the dream!

In the meantime, Cleveland Memory can help revisit old glories, such as the 1948 season when the Indians won the World Series. This link will show you Cleveland Press photos from that championship season.

You can order hi-res digital copies or 8 x 10" prints of these photos, and of nearly any other photo you come across on Cleveland Memory. For more information, click here.