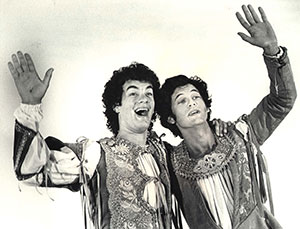 Cleveland Press Shakespeare Photographs: 1870-1982, a collection of more than 400 publicity photographs depicting scenes from stage productions, motion pictures, and televised productions can now be found in EngagedScholarship@CSU, a showcase for research and creative output of Cleveland State University.

While most of the images in the new digital gallery are William Shakespeare's plays, other derivative or non-Shakespearean period productions such as Cole Porter's Kiss Me Kate and George Bernard Shaw's Caesar and Cleopatra are also incorporated. 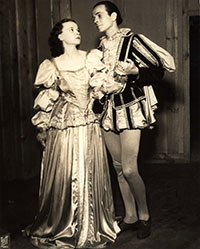 From a production of Romeo & Juliet at the Great Lakes Exposition, 1936.

Regional production companies including Cleveland's Great Lakes Shakespeare Festival, the Stratford Festival in Ontario Canada and others are represented. Notable actors and artists include Richard Burton, Katherine Cornell, John Gielgud, Rudolf Nureyev, Laurence Olivier, and Tom Hanks. The collection can be browsed by title, year of production, or by genre such as comedies, English histories, romances, Roman plays, and tragedies and can be used as primary resources for the study of theater or Shakespeare.

CSU faculty, staff, or students who would like to add their scholarly works to, or learn more about, EngagedScholarship@CSU can contact Barbara Strauss, Assistant Director, Library Discovery Support Services, at b.strauss@csuohio.edu or 216-687-2362.