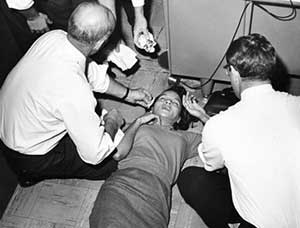 Photos of the Cleveland Press newsroom taken that day show a frantic staff rushing to get the story to press, all the while dealing with the shock of the tragic event.

In the Press office, people clustered around the chattering teletype machines so deep it was hard for newsmen to work.

Visitors in the office joined the reporters, crying out their stunned disbelief, asked each other: "Is he dead or alive? How could it happen? What kind of country is this anyway?"

One classified ad department employee, Mrs. Catherine Mills, fainted in the City Room when she heard the flash. She was administered oxygen and quickly revived.*

Bishop Nelson M. Burroughs of the Episcopal Diocese of Ohio expressed the following:

"In John Kennedy, we have a man whose complete devotion to his country was strikingly evident. We honor him for all he has done for us. Thoughts and prayers and support of all Americans will surround the new President in the task he assumes."

In the end, the dreadful events of that day left Greater Clevelanders, along with the rest of nation, to grieve the loss of a "devoted leader" and to ponder an uncertain future with a new one as Head of State.

Read more Press articles about Cleveland's reaction to the assassination.