The teletypes in the Cleveland Press UPI room came to life with the first reports at 1:34 p.m.:

"No casualties were reported."

"The incident occurred ... just east of an underpass leading toward the Trade Mart where the President was to ma-- 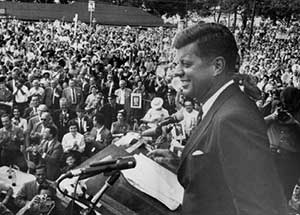 Fifty years have passed since the assassination and many of us who were around then can still recall where they were and what they were doing when they heard the tragic news and the feeling of shock, disbelief, and sadness that followed.

An article* on page one of the Cleveland Press from November 23rd, the day after the assassination, captures the local reaction to the tragedy:

A tremendous, all-engulfing wave of grief and shock, swift and numbing, swept downtown Cleveland this afternoon with the news that President Kennedy had been assassinated.

Up and down Euclid Ave. the word swept like wildfire. Strangers grasped each other by the arm ... "Did you hear? ... The President was shot. ... Terrible. ... Terrible!"

News of the assassination jammed telephone systems causing, as the Press reported, the worst tie-up of phone facilities in memory. Children were sent home from school, events were cancelled and downtown stores dressed their windows for mourning with black crepe and photos of the deceased president. CONTINUED IN PART 2.