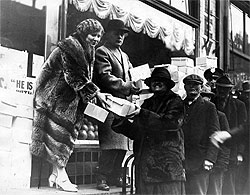 Beginning in 1924 and well through the Great Depression years, successful Cleveland restaurateur, George Dallas, provided a free Thanksgiving meal to thousands of unfortunate Clevelanders who were facing hard times.

Dubbed the "Samaritan of West 3rd" and the "Thanksgiving Santa Claus" by the Plain Dealer, Dallas, his wife, Alma, and his daughter, Marie, would arrive at their restaurant at 1363 W. 3rd Street and would begin preparing for the presentation of the thousands of boxes containing sandwiches, dessert, fruit and coffee. In 1929, Dallas' "grocery list" for all of the meal boxes he made that year included 200 lbs. of bologna, 210 lbs. of special sausage, 350 lbs. of goose liver, 112 fresh hams, 96 turkeys, 16 barrels of apples, 22 barrels of oranges, 1,200 loaves of bread, and 2,000 cakes. The number of people he served grew each year until in 1932, Dallas fed 10,000 people in Public Hall.

Over the years, the Plain Dealer has offered a couple of different accounts about what initially inspired George Dallas to provide his annual free Thanksgiving meal. In a Nov. 24, 1929 article, Dallas, himself states that "the idea came to me in a dream once,"(p. 12A) while an article from November 22, 1930 issue says:

Dallas came from America as an immigrant from Greece when he was 12 years old and penniless and hungry, was turned down when he asked someone for food. He vowed then he would never refuse a hungry man a dinner if it was in his power to give him one. (p. 15, col. 4)

Mr. Dallas came to Cleveland from Athens, Greece, as a boy of 9. He was supposed to meet an uncle here, but the latter had returned to Greece. So the boy found himself homeless and hungry on Thanksgiving Day. That was the inspiration for feeding unfortunates on that holiday. (p. 27, col. 1)

No matter the reason, George Dallas summed it up well when he said, "People say 'Why do you do it, George?' but I say 'I work hard, I make money -- but you can't take your money out of this world with you. This is what I like to do with it.'"