The Cleveland Memory Project celebrates its tenth annivesary this year and to mark this milestone, we offer a glimpse back to the project's inception and the people who made it possible: 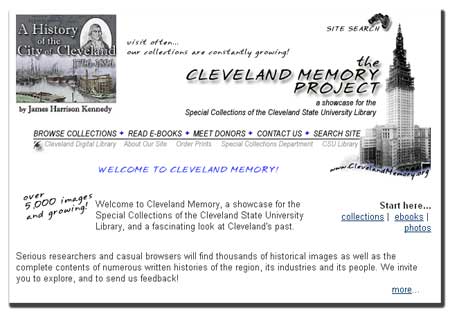 Screenshot of the CMP homepage from June 2002

The Cleveland Memory Project was launched in 2002 after the Cleveland State University Library purchased a license for the CONTENTdm image database from Washington State University to organize and present its growing collection of digitized local history images. Needing an introductory page and place for the search and browse functions to be accessed, the Library decided to centralize all its local history web efforts there and named it The Cleveland Memory Project.

By late 2000, it was apparent that the Library's electronic local history efforts needed a new approach. The practice of creating separate html pages that combined text with embedded images was proving too awkward, especially when changes were needed across the site. The late Professor Walter Leedy, who was then allowing the Library to digitize his substantial postcard collection, urged us to obtain a database for serving up the images.

Library Systems Head Bruce Jeppesen investigated the possibilities and recommended CONTENTdm as being both affordable and flexible enough to export the data elsewhere, should it prove insufficient. He also recommended obtaining the domain names ClevelandMemory.org, -.com and -.net. The Library's Management Team, in particular, Library Director Glenda Thornton and Collection and Database Management Head, Henry York, approved the Cleveland Memory project on November 27, 2000.

The Library obtained a CONTENTdm license in 2001. Working together the Library's Coordinator of Information Access and Organization, Michael Boock, web designer Donna Stewart, Database Maintenance Supervisor Joanne Cornelius, Systems programmer Russ Rucky and others, created the architecture for the new site and launched it in April 2002. Those early months and years saw Cleveland Memory go from a few dozen visitors a day to the thousands currently accessing our digital collections, but those early days were exciting. — Bill Barrow, Special Collections Librarian, Michael Schwartz Library