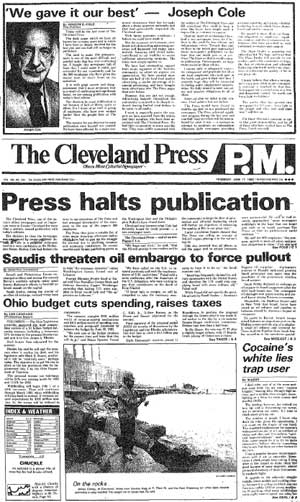 Thirty years ago on June 17, 1982 The Cleveland Press, Cleveland's only surviving afternoon daily newspaper, stopped its presses for good. Founded by Edward W. Scripps as the Penny Press in 1878, it started out as a small, 4-page afternoon daily, and under the editorial leadership of Louis B. Seltzer, who helmed The Press from 1928 to 1966, it became one of the country's most influential newspapers.

During the second half of the 1960s, The Press' readership began to decline, a fate shared by other large afternoon dailies, and it lost its lead to the Plain Dealer in 1968. In 1980 Cleveland businessman Joseph Cole bought the paper from Scripps-Howard and tried to breathe new life into it, but the sharp economic recession in the Cleveland area was too much to overcome. On June 17, 1982, Cole announced the closing of The Cleveland Press and, with the appearance of the final edition later that afternoon, Cleveland became a one newspaper town.

Though The Cleveland Press plant at East 9th and Lakeside was torn down in 1983 to make way for the North Point Building, The Press' editorial library or "morgue" found a new home in 1984 when Joseph E. Cole donated it to the Michael Schwartz Library at Cleveland State University. The approximately half a million 8x10 black and white photographs and one million news clippings that comprise "The Cleveland Press Collection" can be found in the library's Special Collections. More than 8,000 photos and documents from the collection are also available online via The Cleveland Memory Project.

More about the Cleveland Press: