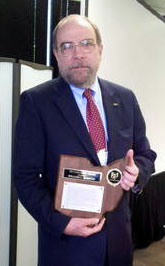 Bill Barrow, Special Collections Librarian at the Michael Schwartz Library, Cleveland State University, was recognized for his work with the Cleveland Memory Project and Ohio's Heritage Northeast by the Society of Ohio Archivists at their annual conference on Friday, May 18, 2012.

Bill was one of two recipients of the SOA's merit award, which is annually presented to individuals or organizations that have "by excellence in deeds, actions, or initiatives improved the state of archives in Ohio over the past year." Angela O'Neal, Director of Collections Services for the Ohio Historical Society, was also recognized with a merit award for her outstanding service to the Society of Ohio Archivists and for promoting archives within Ohio.

At the 2012 SOA conference, Bill was presented with a plaque that reads:

William C. Barrow, Special Collections Librarian at Cleveland State University (CSU), is given this award in recognition of his efforts in founding and directing the Cleveland Memory and Ohio's Heritage Northeast Projects. Together with the hard work and dedication of numerous colleagues and volunteers, the projects have flourished and provided a rich portal of the area's heritage. Preceded by the Cleveland Digital Library, the Cleveland Memory Project features a trove of rich documentation that links an array of collections and subject topics from across the Cleveland metropolitan area. Through its leadership in this field regionally, the CSU Library has also provided the server for a broad Ohio's Heritage Northeast platform that links universities, colleges, and a number of public libraries with historical photographs.

For his on-going leadership of and involvement with these inspiring programs, it is fitting that the Society of Ohio Archivists presents Bill Barrow with a 2012 SOA Merit Award.

In his acceptance speech, Bill pointed out that the Cleveland Memory Project is highly collaborative and that he was accepting on behalf of the hundred-plus people who have contributed to its success since 2002, naming people in the Michael Schwartz Library and recognizing three contributors in the audience from area public libraries and non-profits who have helped to build Cleveland Memory.