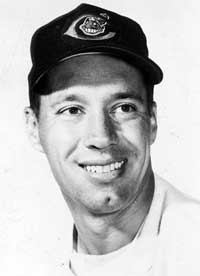 If you ask any knowledgeable baseball fan to name the greatest player in Cleveland Indians history, you will always get the same response: Bob Feller. And rightly so.

Born in Van Meter, Iowa, Bob Feller made his major league debut on July 19, 1936 at the age of 17. His first starting assignment came on August 23 at League Park, against the St. Louis Browns. Feller went nine innings that day and struck out 15, as the Indians won 4-1. Later that same season, Feller went on to strike out 17 batters, thus becoming the first major league pitcher to strike out as many hitters in a game as his age. In 1938, Feller struck out 18 hitters in a game against the Detroit Tigers, setting the major league record for strikeouts in a nine-inning game. This record would not be surpassed until 31 years later.

Feller led the American League in pitching victories and strikeouts from1939 through 1941. In December of 1941, days after the bombing of Pearl Harbor, Feller enlisted in the U. S. Navy and volunteered for combat service. He served as gun captain aboard the USS Alabama until the end of World War II in 1945 and was decorated with five campaign ribbons and eight battle stars. Upon his discharge from the Navy, Feller went back to pitch for the Indians for the remainder of the 1945 season. In 1946, his first full season back in baseball, he again led the American League with 26 victories and a phenomenal 348 strikeouts.

Feller went on to pitch for the Indians through the 1956 season. He finished with career totals of 266 wins and 162 losses, and 2,581 strikeouts. He pitched three no-hitters, including one against the Chicago White Sox on Opening Day, 1940, and 12 one-hit games. He was selected as an All-Star eight times, and was the winning pitcher for the American League in the 1941 and 1946 games. In 1962, during his first year of eligibility, he was elected to the Baseball Hall of Fame.

Upon his retirement as a player, Feller kept living in the Greater Cleveland area, and worked in private industry as an insurance salesman and as a public relations specialist. He remained close to the Indians organization for the rest of his life, serving the club as a spring training pitching coach and a public relations spokesman. He would often don the Indians uniform for old-timers games and other events, and was fond of demonstrating his pitching ability for many years after his last big-league game. In June of 2009, at the age of 90, Feller pitched in the Baseball Hall of Fame Classic, an exhibition game at Cooperstown, New York.

During the last few months of his life, Feller suffered from various illnesses. He died of complications from leukemia on December 15, 2010, at the age of 92.

Bob Feller is immortalized in the form of a statue outside the gates of Progressive Field. More important, he left behind a permanent legacy as a pitcher, as a naval hero, and as an ambassador for baseball and for the Cleveland Indians. He will be remembered as long as the game of baseball is played.

As part of the archives of the Cleveland Press, the Cleveland Memory Project is proud to be able to present a collection of photographs of Bob Feller, featuring him throughout his life: as a child, as a member of the Indians, as a naval officer, and as a businessman. View these photographs.