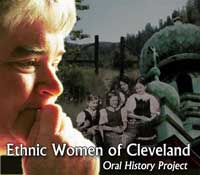 You can now listen to Ann Hankavich talk about her early childhood in the Urkaine, her emigration to Canada and her life in Cleveland after marrying her husband.

Ilona Palasic's story is a little different. Growing up as a second generation American in Cleveland, she speaks about growing up in the Hungarian neighborhood on Buckeye Road.

You can listen to these accounts and more as these eastern European women share their experiences of becoming Americans in Cleveland. Find out more about Ethnic Women of Cleveland.