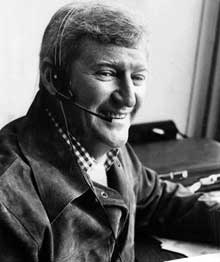 Herb Score pitched for the Cleveland Indians from 1955 to 1959, twice making the American League All-Star team and leading the league in strikeouts.

After his playing days were over, Score was a member of the Indians broadcasting team from 1964 until his retirement in 1997. Herb Score will be remembered, and fondly, as long as there are baseball fans in Cleveland.